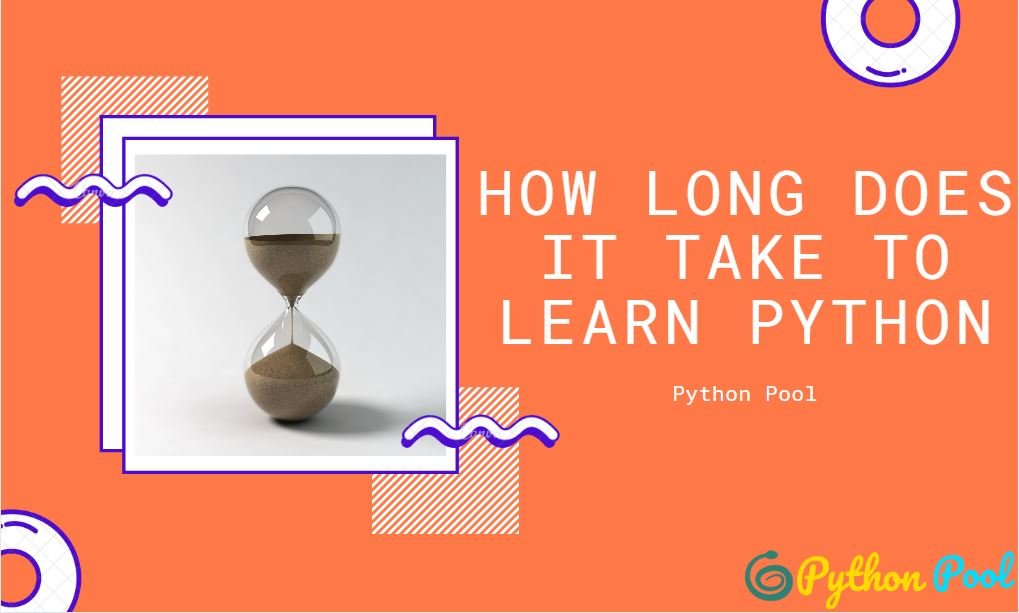 Python replaced Java as the most popular language in colleges and universities and has never looked back.  So let’s start the Journey Starting From Why Python to how long does it take to learn python programming language.

Python is a general-purpose language, which means it can be used to build just about anything, which will be made easy with the right tools/libraries.

Professionally, Python is great for backend web development, data analysis, artificial intelligence, and scientific computing. Many developers have also used Python to build productivity tools, games, and desktop apps, so there are plenty of resources to help you learn how to do those as well.

Why should you learn Python as your first programming language:

So, does Python’s broad range of uses mean tech newbies should stick to more familiar-sounding web development languages? No way! Python’s range might sound intimidating, but it’s known for being an easy-to-learn, easy-to-use programming language.

Besides being awesome, Python should be your first programming language because you will quickly know how to think like a programmer. Python is very readable. You won’t waste a lot of time memorizing the arcane syntax that other programming languages will present you. Instead, you will be able to focus on learning programming concepts and paradigms. Once you have those tools under your belt you can move on to other more powerful, specific languages and readily understand a given piece of code. But, don’t be mistaken. You are not playing with a kids toy. Python is super-powerful! There’s a reason NASA uses it. As a beginner, you’ll be able to accomplish anything you need with Python.

WHO SHOULD LEARN PYTHON?

So, does Python’s broad range of uses mean tech newbies should stick to more familiar-sounding web development languages? No way! Python’s range might sound intimidating, but it’s known for being an easy-to-learn, easy-to-use programming language. And that means Python is a good language to learn for:

How Long Does it Take to Learn Python

The time it will take you to learn Python naturally depends on your background, the time you put into it, and the problems you want to solve.

If you are asking me about how long does it take to learn Python? Then I will answer you that it depends on you. If you are very passionate about learning the python programming language, then you will learn python very quickly. But, if you are just learning python to make some money from it then sorry. Because in that case, it will become tough for you to learn python.

If you’re completely new to programming, with regular and dedicated practice, you should be able to pick up the basic syntax and structure in about 6-8 weeks.  Learning python doesn’t take much time. But to become perfect in python takes a lot of time. If you are a newbie and want to learn Python. You will have to be very dedicated and focused though. If you already have experience in other languages it might just take a week or two for you to pick up the basic syntax and structure of the language.

To become an expert in Python, you need to keep working on projects. More the number of projects you do, the more you learn.

However, if you know some basics of other programming languages like C and you are interested in them. Then it will be very easy for you to understand as well as learn it. Where if you are new to the programming world then python is a good choice but make sure you have the passion for learning it then you will learn it very quickly.

Programming is about a lot more than the basics though. To really become a well advanced level programmer could take anywhere from 2-4 years or more with regular practice. It depends on how much time you are dedicating, how passionate you are, your logic and creativity, and much more. However, the truth is even master programmers learn new things every day. With programming, there is never a finish line where you are “done” learning. Learn to embrace the journey and you’ll be well on your way. Therefore, it’s impossible to give exact figures here: this is the type of expertise you gain in practice, and it’s ultimately context-dependent. In a challenging environment, you’ll become an advanced Python programmer after two to three years.

Is It Possible To Learn Python Without Any Background In Programming Language?

Programming is simply based on logic. If you have a great sense of logic, you can start with virtually any language like Python, Java. When it comes to readability of code, PYTHON is one of the easiest languages as it needs fewer lines of code. You can easily start if you have some basic know-how of English and mathematics.

How Fast Can You Learn and Learning Factors

Unfortunately, answering this question is no simple task. Just like mastering any other skill, similarly learning to programme in Python depends heavily on your background and individual abilities. Below are the factors I find most important for learning Python.

It is crucial to choose learning methods that fit us best and support the learning process instead of hindering it.

A person that has never written a line of code before will find learning a programming language more difficult than someone who’s enriching their programming portfolio after several years of professional development. All programming languages have similar logic behind them, so once you start thinking like a developer, you’ll find it relatively easy to master a new one.

However, this doesn’t mean that someone without programming experience won’t be able to learn Python. Python is a perfect choice for programming newbies because it’s simple and helps you develop good programming habits, so don’t worry if you’re new to this world.

Obvious yet still forgotten: the time needed to learn or how long does it take to learn Python depends on the time available for learning. If we had two people with equal programming experience and other characteristics mentioned above but different amounts of free time (e.g. 3 hours a day vs. 3 hours a week), they won’t need the same number of weeks to start writing the code.

Why Programmers Should Learn Python in 2020

Anyway, without any further ado, here are my 5 reasons to learn Python in 2020.

Where Can I Learn Python?

You can use books, video tutorials, or online interactive lessons or can take offline coaching at a well-reputed coaching centre.

If you decide to learn Python in 2020 then here are some of the useful Python books, courses, and tutorials to start your journey in the beautiful world of Python.

You might know that there are many websites which offer online courses, and videos to teach you different subjects. Same way, you can learn Python as well.

Below are a few websites:

These sites have different ways of teaching Python. You must try all.

If you want to read the book and practice on the sample codes to learn Python, you can do that too. However, you must get some really good books and start reading lessons one by one, and alongside, keep practising the coding on the computer.

Below are few Good Books to Learn Python:

You can get many more books on Amazon; you can get a few good ones after reading their reviews. But My recommendation is to go with Learn Python the Hard way Book.

The Best buy link of Learn Python 3 the Hard Way is Mentioned Below. You can also read our full-fledged review on this book.

You can also join some coaching class for 1 month at most to clear your doubts in the far better way. In addition in class, you interact with other students and tutor and discuss Python which helps you learn it in a much better way.

Self-learning is awesome, but sometimes some doubts are not clarified while learning on your own, therefore joining an offline coaching class is very important to learn Python easily.

So now I think you guys have a clear idea of how long does it take to learn Python. Python is an easy programing language to learn, and it is equally powerful as well. It has been very popular because of its cleaner syntax. If you start learning, you will get to learn it easily. So, start today itself if you have interest in learning Python.

If you still have any doubts you can mention in the comments down below. I will try to answer all of them asap.