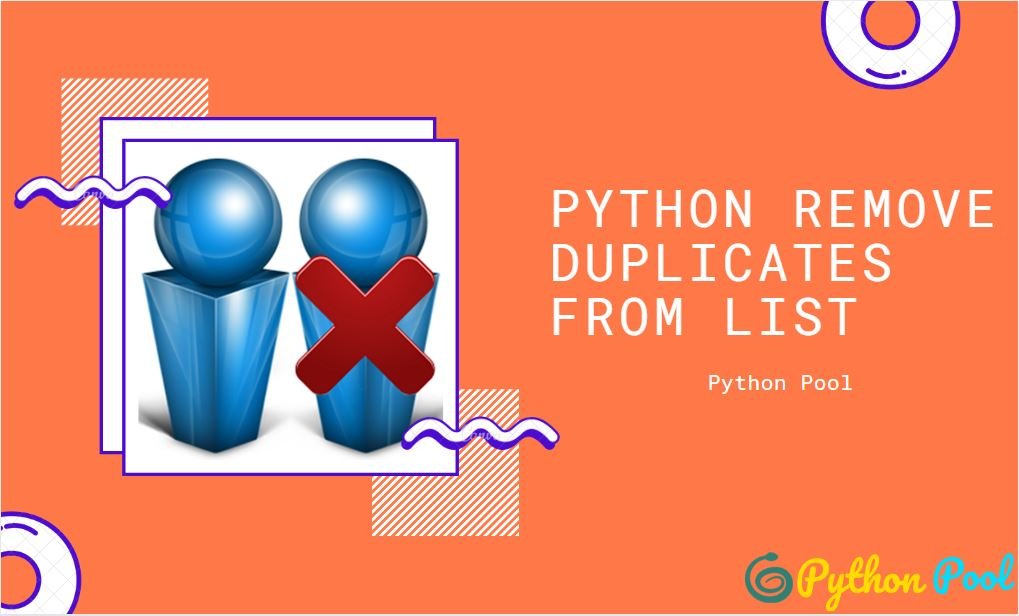 Duplicates generally mean exactly like something else, especially through having been copied. So you want to Python Remove Duplicates from List, there are basically 5 methods by which you can achieve the duplication or copy free Python list.

Ways to remove duplicates from a list in Python

So talking about the ways to remove the duplicates from Python list there are generally following 5 techniques or methods:

The easiest way is to convert it to a set, because sets, by definition, don’t have duplicates:

As we know that set is the unordered collection of unique elements. Python internally uses the hash technique to process sets. It is a quite simple and fast method to remove duplicate items from Python list.

The original order of the sequence (list) may not be preserved using this approach. However, this method will also not work if you have dict or similar object in the list because dict object is not hashable in Python.

The set is formed by placing all the items inside the curly braces {} and the items are separated by comma or by using the built-in function set().

The set can have any number of items, and they may be of different types (integer, float, tuple, string, etc.). But the set cannot have a mutable element, like a list, or dictionary, as its element.

Here we use the brute-force approach to remove duplicate elements from a list. We will create a temporary list and append elements to it only if it’s not present.

By using Enumerate to remove duplicates from Python list

A lot of times when dealing with iterators, we also get a need to keep a count of iterations. Python eases the programmers’ task by providing a built-in function enumerate() for this task.

So in this example, we will use enumerate to remove python remove duplicates from the list.
Enumerate() method adds a counter to an iterable and returns it in a form of enumerating object. This enumerate object can then be used directly in for loops or be converted into a list of tuples using list() method.

The 4th way to Remove Duplicates from a Python list is using the itertools library.
In addition, the itertools module implements a number of iterator building blocks. Each has been recast in a form suitable for Python.

However, this module standardizes a core set of fast, memory-efficient. In addition, they form an “iterator algebra” making it possible to construct specialized tools succinctly and efficiently in pure Python.

For instance, SML provides a tabulation tool: tabulate(f) which produces a sequence f(0), f(1), .... Similarly, the same effect can be achieved in Python by combining map.

These tools work well with the high-speed functions in the operator module. For example, the multiplication operator.

By Maintaining the order using OrderedDict

In Python 3.5 and above OrderedDict of collections library has C implementation.

An OrderedDict is a dictionary subclass that remembers the order that keys were first inserted. However, the only difference between dict() and OrderedDict() is that:

OrderedDict preserves the order in which the keys are inserted. As the regular dict doesn’t track the insertion order. However, the order the items are inserted is remembered by OrderedDict.

This means it is a quite fast and best technique to remove duplication elements from the list in Python. You should also give a try too:

In conclusion, we hope you enjoyed out this article.

We have tried to cover all ways for Python Remove Duplicates From List. In addition let us know if you have a better way of doing this, through the comments.