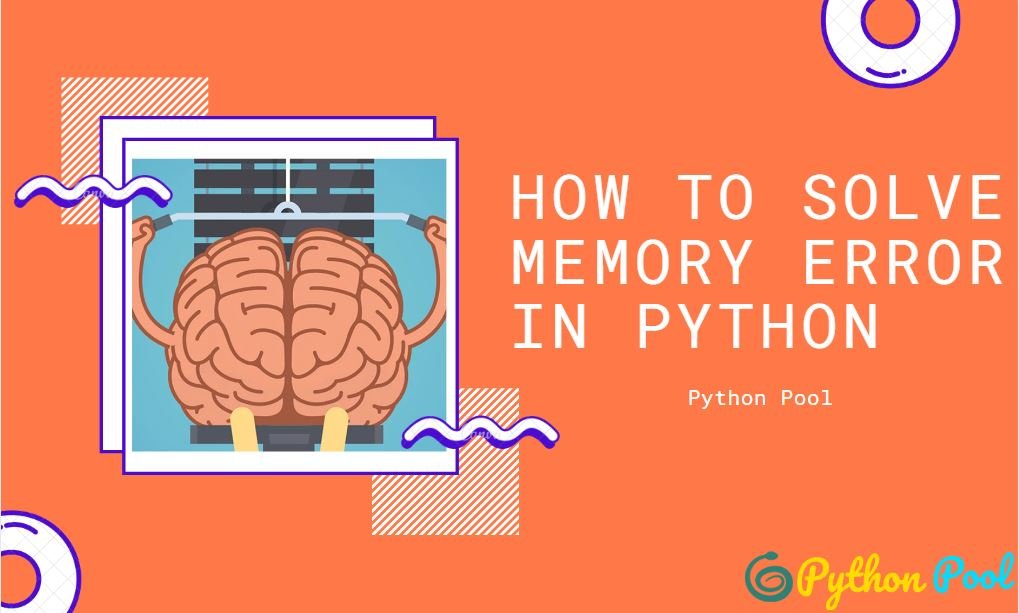 What is Memory Error?

Python Memory Error or in layman language is exactly what it means, you have run out of memory in your RAM for your code to execute.

When this error occurs it is likely because you have loaded the entire data into memory. For large datasets, you will want to use batch processing. Instead of loading your entire dataset into memory you should keep your data in your hard drive and access it in batches.

If an operation runs out of memory it is known as memory error.

If you get an unexpected Python Memory Error and you think you should have plenty of rams available, it might be because you are using a 32-bit python installation.

Your program is running out of virtual address space. Most probably because you’re using a 32-bit version of Python. As Windows (and most other OSes as well) limits 32-bit applications to 2 GB of user-mode address space.

We Python Pooler’s recommend you to install a 64-bit version of Python (if you can, I’d recommend upgrading to Python 3 for other reasons); it will use more memory, but then, it will have access to a lot more memory space (and more physical RAM as well).

For example, in Python 2 zip function takes in multiple iterables and returns a single iterator of tuples. Anyhow, we need each item from the iterator once for looping. So we don’t need to store all items in memory throughout looping. So it’d be better to use izip which retrieves each item only on next iterations. Python 3’s zip functions as izip by default.

Must Read: Python Print Without Newline

Python Memory Error Due to Dataset

Like the point, about 32 bit and 64-bit versions have already been covered, another possibility could be dataset size, if you’re working with a large dataset. Loading a large dataset directly into memory and performing computations on it and saving intermediate results of those computations can quickly fill up your memory. Generator functions come in very handy if this is your problem. Many popular python libraries like Keras and TensorFlow have specific functions and classes for generators.

Python Memory Error Due to Improper Installation of Python

Improper installation of Python packages may also lead to Memory Error. As a matter of fact, before solving the problem, We had installed on windows manually python 2.7 and the packages that I needed, after messing almost two days trying to figure out what was the problem, We reinstalled everything with Conda and the problem was solved.

We guess Conda is installing better memory management packages and that was the main reason. So you can try installing Python Packages using Conda, it may solve the Memory Error issue.

Out of Memory Error in Python

Most platforms return an “Out of Memory error” if an attempt to allocate a block of memory fails, but the root cause of that problem very rarely has anything to do with truly being “out of memory.” That’s because, on almost every modern operating system, the memory manager will happily use your available hard disk space as place to store pages of memory that don’t fit in RAM; your computer can usually allocate memory until the disk fills up and it may lead to Python Out of Memory Error(or a swap limit is hit; in Windows, see System Properties > Performance Options > Advanced > Virtual memory).

Making matters much worse, every active allocation in the program’s address space can cause “fragmentation” that can prevent future allocations by splitting available memory into chunks that are individually too small to satisfy a new allocation with one contiguous block.

1 If a 32bit application has the LARGEADDRESSAWARE flag set, it has access to s full 4gb of address space when running on a 64bit version of Windows.

2 So far, four readers have written to explain that the gcAllowVeryLargeObjects flag removes this .NET limitation. It does not. This flag allows objects which occupy more than 2gb of memory, but it does not permit a single-dimensional array to contain more than 2^31 entries.

How can I explicitly free memory in Python?

If you wrote a Python program that acts on a large input file to create a few million objects representing and it’s taking tons of memory and you need the best way to tell Python that you no longer need some of the data, and it can be freed?

The Simple answer to this problem is:

Force the garbage collector for releasing an unreferenced memory with gc.collect().

Memory error in Python when 50+GB is free and using 64bit python?

On some operating systems, there are limits to how much RAM a single CPU can handle. So even if there is enough RAM free, your single thread (=running on one core) cannot take more. But I don’t know if this is valid for your Windows version, though.

How do you set the memory usage for python programs?

Python uses garbage collection and built-in memory management to ensure the program only uses as much RAM as required. So unless you expressly write your program in such a way to bloat the memory usage, e.g. making a database in RAM, Python only uses what it needs.

Which begs the question, why would you want to use more RAM? The idea for most programmers is to minimize resource usage.

if u wanna speed up ur program though giving more memory to ur application, you could try this:
1\threading, multiprocessing
2\pypy
3\pysco on only python 2.5

How to put limits on Memory and CPU Usage

To put limits on the memory or CPU use of a program running. So that we will not face any memory error. Well to do so, Resource module can be used and thus both the task can be performed very well as shown in the code given below:

Code #2: In order to restrict memory use, the code puts a limit on the total address space

Some Python tools or libraries may be limited by a default memory configuration.

Check if you can re-configure your tool or library to allocate more memory.

That is, a platform designed for handling very large datasets, that allows you to use data transforms and machine learning algorithms on top of it.

A good example is Weka, where you can increase the memory as a parameter when starting the application.

2. Work with a Smaller Sample

Are you sure you need to work with all of the data?

Take a random sample of your data, such as the first 1,000 or 100,000 rows. Use this smaller sample to work through your problem before fitting a final model on all of your data (using progressive data loading techniques).

I think this is a good practice in general for machine learning to give you quick spot-checks of algorithms and turnaround of results.

You may also consider performing a sensitivity analysis of the amount of data used to fit one algorithm compared to the model skill. Perhaps there is a natural point of diminishing returns that you can use as a heuristic size of your smaller sample.

3. Use a Computer with More Memory

Do you have to work on your computer?

Perhaps you can get access to a much larger computer with an order of magnitude more memory.

For example, a good option is to rent compute time on a cloud service like Amazon Web Services that offers machines with tens of gigabytes of RAM for less than a US dollar per hour.

4. Use a Relational Database

Internally, the data is stored on disk can be progressively loaded in batches and can be queried using a standard query language (SQL).

Free open-source database tools like MySQL or Postgres can be used and most (all?) programming languages and many machine learning tools can connect directly to relational databases. You can also use a lightweight approach, such as SQLite.

5. Use a Big Data Platform

In some cases, you may need to resort to a big data platform.

In this post, you discovered a number of tactics and ways that you can use when dealing with Python Memory Error.

Are there other methods that you know about or have tried?
Share them in the comments below.

Have you tried any of these methods?
Let me know in the comments.

If your problem is still not solved and you need help regarding Python Memory Error. Comment Down below, We will try to solve your issue asap.

Thank you, but I still have a doubt: how to make Python use space in the local hard disk?
I am working with a Dell laptop, I7 core, only 1.3 speed, with 16GB RAM and 512GB SSD, on a file of 200k records, and it is crashing, out of memory, when I need to merge data.
When looking at disk usage with the Task Management, there is no use, while the memory and the CPU are at full capacity.
How can I make use of the disk?
Thank you!

Are you trying to merge by reading the whole file altogether? Try using Pandas once and let me know how it goes. It should take care of the memory issues.