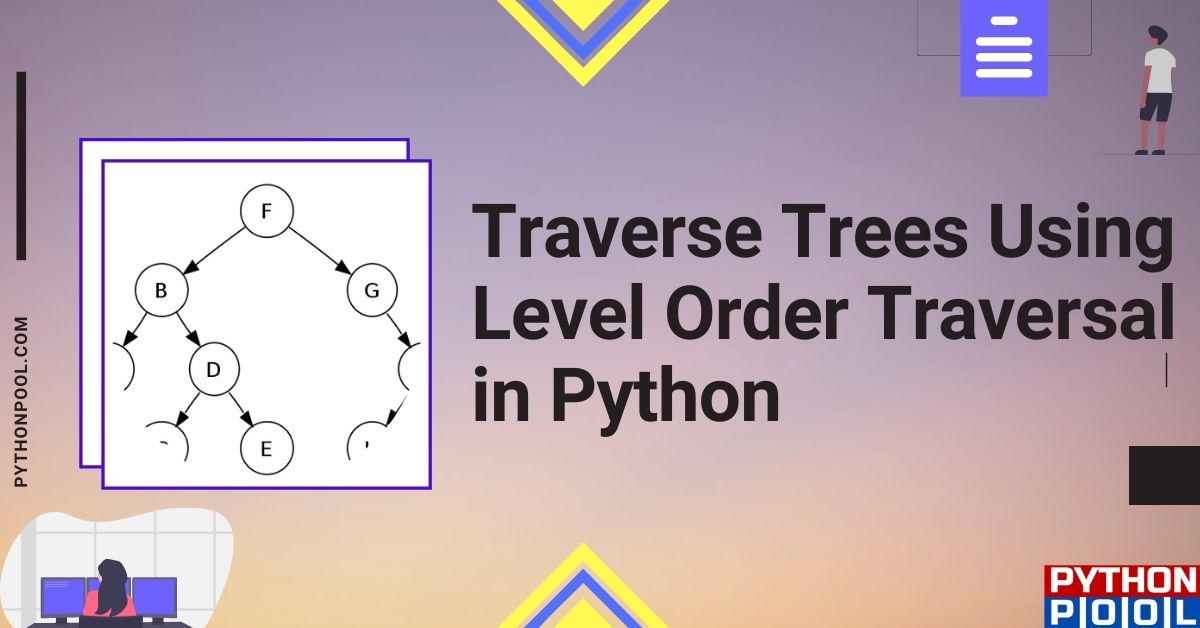 Trees are a type of non – linear data structure. The trees are made up of nodes that are arranged in a hierarchical structure. It starts with a single root node which can have its own child nodes. All the nodes are connected with the help of edges. With trees, we can store information in a hierarchy. Depending on the number of children for each node, trees are classified into different types. In this article, we shall be performing Level Order Traversal in Python for trees.

Traversing is the process of visiting each node of a tree, level by level, until all the nodes have been searched. Level order traversal is a traversing technique for breadth-first binary trees. Binary trees are trees where each node can have a maximum of two child nodes.

The traversing begins from the root node. Then, we progress towards the child nodes of the root node, then its child nodes, and so on until all the leaf nodes have been traversed. Using breadth-first traversal for a tree, we traverse the graph from the root node and gradually move towards its neighboring nodes. We check all the nodes present for a particular depth before moving to the next depth.

Let us understand the traversal with an example of the following tree.

If we were to perform a level order traversal of the above tree, it would be:

For each child node, we shall traverse it and check if it has it is a root node to any other nodes. This shall continue until there are no more child nodes pushed into the queue and the queue becomes empty.

As mentioned above, we shall be performing level order traversal using a queue. We shall perform traversal for the following tree:

First, we shall define a class named ‘Tree’.

Defining the function for traversal

Then, we shall define a function outside the class named ‘Level_Order_Traversal’.

The function accepts only one argument – ‘root’, which represents the root node. We have a list named ‘traversed’ which acts as a queue. First, we will append the list with the root which is actually a class object. Then, we shall check if our root is empty or not. If empty then we would return the empty queue ‘traversed’.

After that, we shall iterate a while loop which will run till the traversed list becomes empty. We shall print the root node using ‘print(traversed[0].node)’.

For the first element of the list, it will print its value. After that we shall pop the printed element from the list and save it into a variable named ‘x’. Then, we shall check if the node popped from the queue ‘traversed’ has any left child node.

If it has, then we shall append that left child node into ‘traversed’. Similarly, we shall also check for the right child node.

The output of the left order traversal is:

The entire program is:

Execution of the code

Then, we would print the node ‘B’ and pop it from the queue. After that, we would check if node ‘B’ has any left child nodes or right child nodes. Since it does have child nodes, ‘D’ and ‘E’ would be appended into ‘traversed’.

After that, we shall print node ‘C’ and pop it from the queue. Then, we will check if it has any child nodes. Since it has one left child node – ‘F’, we would append that into ‘traversed’.

Since the queue ‘traversed’ is empty now, the while loop will stop its execution.

This sums up the left order traversal in python. If you have any questions in your mind, feel free to leave them in the comments below.