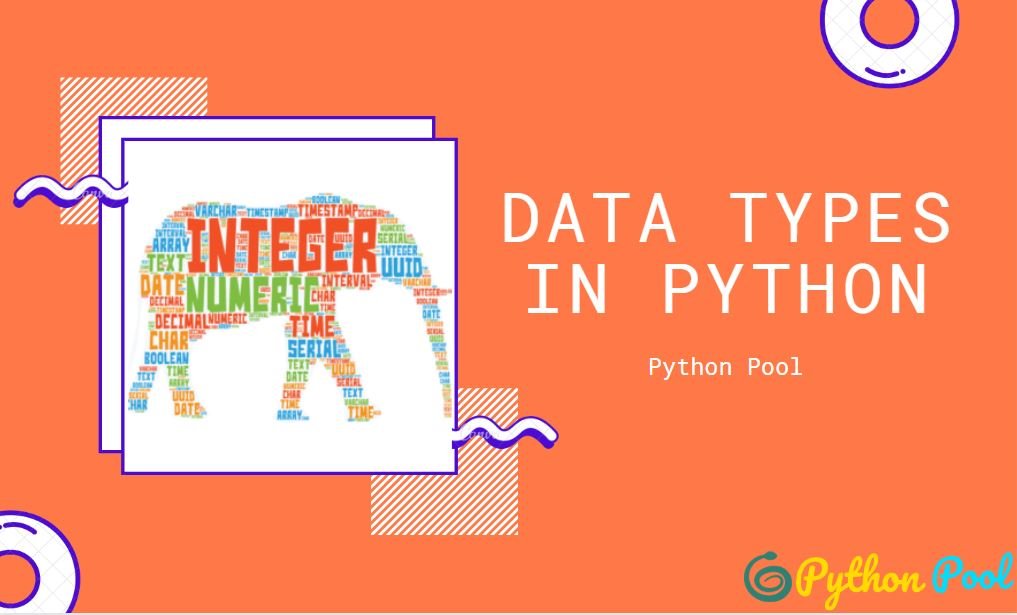 A data type, in Python or in any programming language, is a classification that specifies which type of value a variable has and what type of mathematical, relational or logical operations can be applied to it without causing an error. The string and int, for example, are Python data types that are used to classify text and an integer is a data type used to classify whole numbers.

One of the most crucial parts of learning any programming language is to understand how data is stored and manipulated in that language. Users are often inclined toward Python because of its ease of use and the number of versatile features it provides. One of those features is dynamic typing.

Classifications of Data Types in Python

Data objects of the above types are stored in a computer’s memory for processing. Some of these values can be modified during processing, but the contents of others can’t be altered once they are created in the memory.

Number values, strings, and tuple are immutable, which means their contents can’t be altered after creation.

Setting the Data Type in Python

In Python, the data type is set when you assign a value to a variable:

When programming, if you say that a variable has a numeric value, you are being ambiguous. This is because numbers can be either integers or floats (floating points)

Python has many useful built-in data types. Python variables can store different types of data based on a variable’s data type.

It is useful for problem solvers to understand a couple of Python’s core data types in order to write well-constructed code.

Python supports four distinct numeric types: integers, long, float and complex numbers. In addition, Booleans are a subtype of plain integers. Integers or int are positive or negative whole numbers with no decimal point. Long integers have unlimited precision and float represent real numbers and are written with a decimal point dividing the integer and fractional parts. Complex numbers have a real and imaginary part, a + bc, where a is the real part and b is the imaginary part.

The Python programming language provides four numeric data types. They are as follows.

Like in math, integers in computer programming are whole numbers that can be positive, negative, or 0 (…, -1, 0, 1, …). An integer can also be known as an int. As with other programming languages, you should not use commas in numbers of four digits or more, so when you write 1,000 in your program, write it as 1000.

We can print out an integer in a simple way like this:

We can do math with integers in Python, too:

Integers can be used in many ways within Python programs, and as you continue to learn more about the language you will have a lot of opportunities to work with integers and understand more about this data type.

This value is represented by float class. It is a real number with floating-point representation. It is specified by a decimal point. Optionally, the character e or E followed by a positive or negative integer may be appended to specify scientific notation.

A Boolean is such a data type that almost every programming language has, and so does Python. Boolean in Python can have two values – True or False. These values can be used for assigning and comparison.

Boolean data types are similar to a coin. At a time either we found head or tail, such that Boolean either return True or False. There are two constants, true and false, these constants are used to assign the value to a Boolean data type.

Strings are an immutable collection of characters. In Python, strings can store textual characters or arbitrary collection of bytes (images file contents). In python string objects are stored in a sequence.
Sequences maintain a left-to-right order among the items and are stored and fetched by their relative positions.
It’s very easy to create the strings objects in Python, any characters which are enclosed by quotes become string (quotes can ‘(single) or “(double)).

Since strings in Python are ordered, we can extract individual characters from a string using their integer indices, starting with 0. The first letter of a string is always at position 0, and the positions numerically increase after that. For example:

The list is one of the most used in Python for traversing the elements. It is used along with tuples, dictionaries, and sets. The list is a collection of items/data which is ordered and can be changed whenever needed. It also allows duplicate records in the data set. Firstly, we need to understand the functionality of the list and its characteristics. Using a list we can do multiple operations such as appending, slicing, adding and removing elements, indexing, etc. and there are many different functions in the list and it goes on. Below are some of the functionalities of lists in Python.

All lists in Python are zero-based indexed. When referencing a member or the length of a list the number of list elements is always the number shown plus one.

You can assign data to a specific element of the list using an index into the list. The list index starts at zero. Data can be assigned to the elements as follows:

Multidimensional lists are also allowed. Although most people can’t comprehend more than three or four dimensions. You can declare multiple dimensions by separating a with commas. In the following example, the MyTable variable is a two-dimensional array :

How Does A Tuple Data type Differ From The List Data Type?

Tuples do differ a bit from the list as they are immutable. Modification of a tuple is not allowed in Python. We can not add or remove any element later. Instead, Python expects us to create a new one with the updated sequence of elements.

Dictionaries in Python are lists of Key: Value pairs. This is a very powerful data type to hold a lot of related information that can be associated through keys. The main operation of a dictionary is to extract a value based on the key name. Unlike lists, where index numbers are used, dictionaries allow the use of a key to access its members. Dictionaries can also be used to sort, iterate and compare data.

Dictionaries are created by using braces ({}) with pairs separated by a comma (,) and the key values associated with a colon(:). In Dictionaries, the Key must be unique. Here is a quick example of how dictionaries might be used:

We use the key to retrieve the respective value. But not the other way around.

Must Read: Implementation of Stack in Python

In Python, a set is a collection of an unordered and unindexed data elements of different data types. In Python, the set data type elements are immutable (duplicates are not allowed). However, set itself is mutable. Sets are created with curly brackets. Let’s look at the code to illustrate set in Python.

Sets are separated by commas and enclosed in curly braces. Let’s take an example to understand the sets in Python.

Next, we introduce some other operations to set data types

If we need an immutable set, we can create a frozen set with the frozenset() function.

This line creates a frozen set from a list.

Frequently, you will want to convert data from one type into another. In programming, we call this process typecasting. Python has tons of functions which allow us to do these type conversions on basic data types.

Integers and floats are data types that deal with numbers.

To convert the integer to float, use the float() function in Python. Similarly, if you want to convert a float to an integer, you can use the int() function.

Integers, floating-points can be converted to complex numbers.

At this point, you should have a better understanding of some of the major Python data types that are available for you to use in Python. Each of these data types will become important as you develop programming projects in the Python language.

Once you have a solid grasp of data types available to you in Python, you can learn how to convert these Python data types.

This tutorial covered the various Python data types and tried to explain each of them with examples. You may find all the relevant information here which can be useful for you in developing Python programs.

If you have any doubts do let us know in the comment section below.