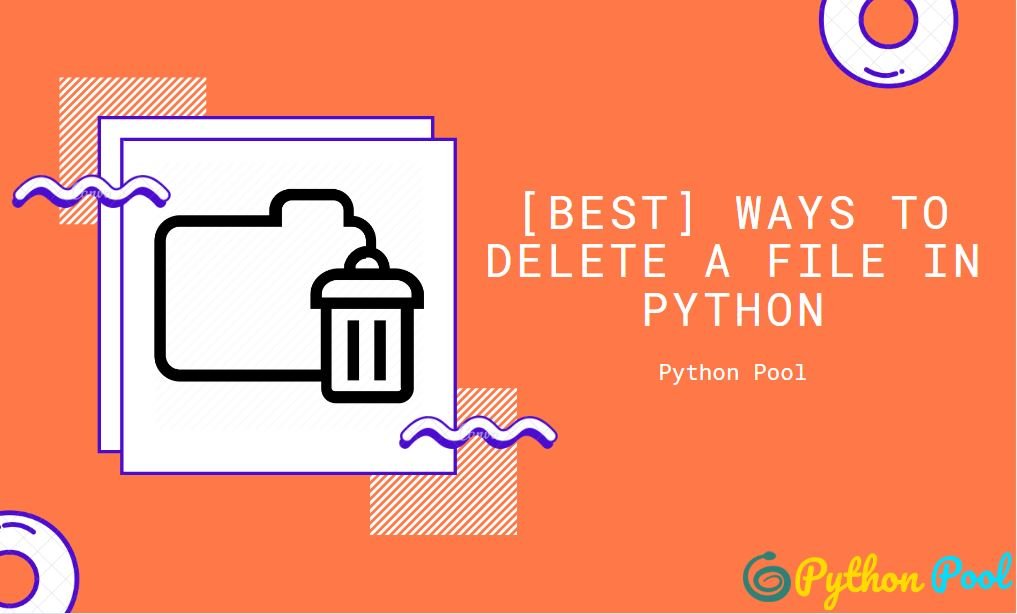 Many times a user or a python programmer needs to delete a file. The reason maybe he/she created the file by mistake, or there is no need for that file anymore. Whatever the reason, there are ways to Python Delete file without manually finding the file and deleting them by UI.

There are multiple ways to Delete a File in Python but the best ways are the following:

Note: You can use os.rmdir() can be used to remove the directory.

Let’s check out some of the examples to Delete Python File using os.remove function.

Explanation: In the above example we have deleted the file or removed the path of the file named testfile.txt. Steps Explaining how the program flow goes are:
1. First, we have imported the os library because the remove() method is present inside the os library.
2. Then we have used the inbuilt function os.remove() to delete the path of the file.
3. In this example, our sample file is “test_file.txt”. You can place your desired file here.

Note: If there is no file named test_file.txt the above example will throw an error. So it’s better to check first whether the file is available or not before deleting the file.

Example 2: Checking if File Exists using os.path.isfile and Deleting it With os.remove

In example 1, we have just deleted the file present in the directory. The os.remove() method will search the file to remove in the working directory. So it’s always better to check if the file is there or not.

Let’s learn how to check if the file with that name available in that path or not. We are using os.path.isfile to check the availability of file.

In the above example, we just added os.pasth.isfile() method. This method helps us to find out whether the file exists or not at a particular location.

Example 3: Python Program to Delete all files with a specific extension

Using this program, we will remove all files from the folder with the .txt extension.

Example 4: Python Program to Delete All Files Inside a Folder

To delete all files inside a particular directory, you simply have to use the * symbol as the pattern string.

In this example, we’re deleting all the files inside the folder pythonpool.

Note: If the folder will contain any sub-folder, then the error may be raised as the glob.glob() method fetches the names of all the folder contents, whether they’re files or sub-folders. Therefore try to make the pattern more specific such as *.* to fetch only the contents that have an extension.

os.unlink() is an alias or another name of os.remove() . As in the Unix OS remove is also known as unlink.

Note: All the functionalities and syntax is the same of os.unlink() and os.remove(). Both of them are used to delete the Python file path.
Both are methods in the os module in Python’s standard libraries which performs the deletion function.

It has two names, aliases: os.unlink() and os.remove()

The likely reason for providing both aliases to the same function is that the maintainers of this module considered it likely that many programmers would be coming up to Python from lower-level programming in C, where the library function and underlying system call is named unlink() while others would, likely, be coming down to the language from using the shell or scripting where the command is rm (short for “remove”).

shutil.rmtree(): Removes the specified directory, all subdirectories, and all files. This function is especially dangerous because it removes everything without checking (Python assumes that you know what you’re doing). As a result, you can easily lose data using this function.

rmtree() is a method under the shutil module which removes a directory and its contents in a recursive manner.

It will delete the entire directory of files inside Test including the Test folder itself.

The pathlib module is available in Python 3.4 and above. If you want to use this module in Python 2 you can install it with pip. pathlib provides an object-oriented interface for working with filesystem paths for different operating systems.

To delete a file with thepathlib module, create a Path object pointing to the file and call the unlink() method on the object:

The unlink() method works for files. If a directory is specified, an OSError is raised. To remove a directory, we can resort to one of the previously discussed methods.

Pathlib module provides different ways to interact with your files. Rmdir is one of the path functions which allows you to delete an empty folder. Firstly, you need to select the Path() for the directory, and then calling rmdir() method will check the folder size. If it’s empty, it’ll delete it.

This is a good way to deleting empty folders without any fear of losing actual data.

References and Must Read

In this article, we have learned various best ways to Python Delete File. The syntax to delete a file or folder using Python is quite simple. However, please be advised that once you execute the above commands, your file or folder would be permanently deleted.

If you still have any doubts regarding Python Delete File. Do let us know in the comment section below.