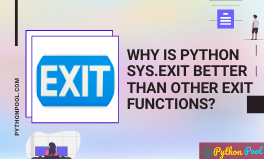 Sys.exit is generally used in programs to raise the SystemExit Exception. With this exception, the program is closed with a proper code passed into the argument.

When sys.exit is called, it raises a SystemExit Exception. In this article, we will learn how to use sys.exit, what arguments we can pass, when it should be used, and many more important things.

Before using sys.exit, we first need to import the ‘sys’ module into our systems. To import use – ‘import sys.’

Parameter of sys.exit in python

sys.exit accepts only one argument – status, and that too is optional. If we want to print something while exiting like why we want to exit or something, we can pass that in the argument. It can be either an integer, float, boolean, or string.

sys.exit returns SystemExit Exception along with the passed argument.

How to use sys.exit in Different IDE’S

The output is different in different IDE’s. Except for string argument, the output for every other type of argument won’t work for Pycharm.

But first, let us understand to use sys.exit with argument.

The output is different for different Integrated Development Environment(IDE).

Now let us learn how to use the arguments.

The output for string type argument remains mostly the same for all IDE’s.

You can see that whatever we passed in the argument got printed after the SystemExit Exception.

We can pass any integer we want. It can be status code too.

In IDLE or Pycharm, the integer argument would not get printed.

Using sys.exit along with Try block in python

We know that, if we are using try-except finally blocks, whatever we print in finally block gets printed for sure. Let us see whether it is true while using sys.exit or not.

Another way of exiting the program by raising the SystemExit exception is by using the raise keyword.

It totally depends upon you, which way you want to exit the program. Everything else is the same about the two methods except that, for sys.exit, you have to import sys.

Comparing the sys.exit function with other functions in python

Two more ways are exit() and quit(). But they should not be used in the production environment because they use the site module which is not installed everywhere.

Another Common way for exiting is by using the os._exit(). So let us see what is the difference between the two.

os._exit() method is generally used to exit the process with a specified status without calling any cleanup handlers, flushing stdio buffers, etc. Also, it does not return anything.

Note: This method is normally used in the child process after the os.fork system call. Therefore, os._exit should only be used in some special scenarios.

So, the best way of exiting the program is sys.exit().

Whenever we want to exit from the program without reaching the end of the program, we can use the different exit programs available in python. The most standard and commonly used one is the sys.exit() function. We can also usu raise SystemExit to exit out of the program.

If you still have any problem or request, do let us know in the comment section below.

Check the code in “Using sys.exit along with Try block in python”