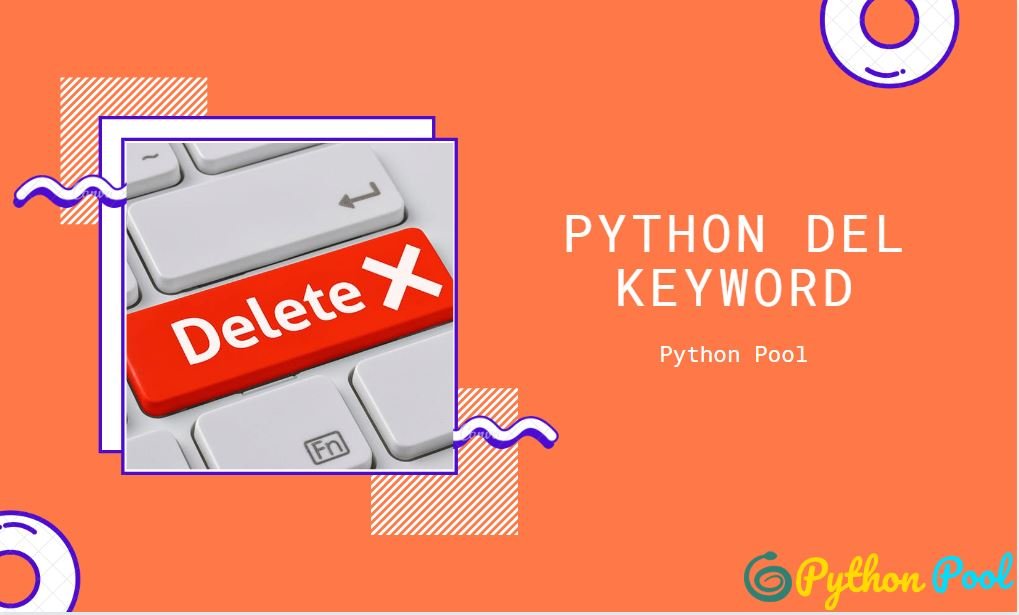 Everything in Python is an object, and almost everything has attributes and methods. So the main objective of Python del is to delete the objects in the python programming language. Here object can be variables, lists, or parts of a list etc.

Each object is any kind of Python object. Usually, these are variables, but they can be functions, modules, classes.

The del statement works by unbinding the name, removing it from the set of names known to the Python interpreter. If this variable was the last remaining reference to an object, the object will be removed from memory. If, on the other hand, other variables still refer to this object, the object won’t be deleted.

How to delete or remove the element in Python

There are 3 different ways of removing or deleting elements in Python.

But in this tutorial, we will learn about the working of Python del.

What is Python del?

The Python del is generally used to remove the variable from the local or global namespace. This is used to recover memory from data that is no longer needed.

Here, del is a Python keyword. And, obj_name can be variables, user-defined objects, lists, items within lists, dictionaries etc.

Point to Be Noted

The del statement can be used to remove an item from a list by referring to its index, rather than its value.

Now let’s jump directly into examples and check out the working of Python del statement.

Let’s see some examples of del statement and try to delete some objects.

Here the output of the above example is ‘var’ is not defined. In this example, we get an error because the Python del operator deletes the variable. And now there is no variable named var stored in the memory.

In the above example, we deleted the object std using del std. For the first time, we get our desired output. This is because we haven’t used the del keyword. But after using the del std in our object. We got the name error as the object is deleted from the memory.

Example 5: Deleting all the Elements in a Range

So, in this example, we have initialized a list with 7 elements in it. Then we deleted the elements in position 2 to 5. With the help of slicing and Python del keyword.

Example 6: Python Program to Remove a Key From a Dictionary

Python del: Additional Tips, Point to be Noted and Examples

However, you can delete an entire tuple or string.

Difference Between remove, Python del and pop in Python

Computational complexity (i.e. running time or Big-O) is as follows:

Note that these running times are the worst-case scenarios. For example, deleting an element at the beginning of the list takes constant time.

Which is the best way to delete the element in List?

Difference Between Python del vs Assigning to None

The difference is that x = None will free whatever it referenced but keep the name around even though it’s just referencing None (which is a type, NoneType).

On the other hand, del x will completely remove both the name and what it referenced. If you thereafter try to use x a NameError will be thrown (or AttributeError in case of an object property).

So in practice, by assigning None to a name you can still use it in expressions while using del the name is completely removed. In the first case, a few bytes are needed to keep the name in memory, while the later completely clears all memory usage.

When should and shouldn’t I use the del keyword in Python?

Use the ‘del’ statement when you want to remove an item from a list and you know you will never need to reference that item again.

If you want to hang on to the removed list item for whatever reason, use the ‘pop’ method instead.

Python del is a useful keyword. Its syntax may be confusing at first. But once we use del more like an operator, not a method call, it is easy to remember.

Deletion is recursively defined very similar to the way assignment is defined. Rather than spelling it out in full details, here are some hints. Deleting a target list recursively deletes each target, from left to right.