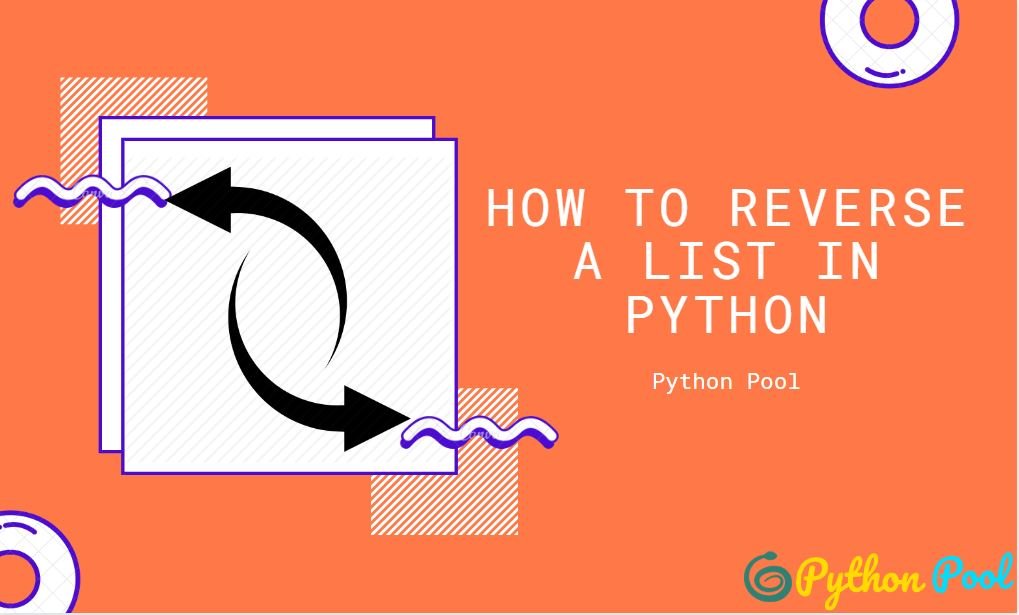 We have generally four ways to achieve this. But the best way to achieve the Python Reverse list is by using the reverse() function. The other three ways to reverse a list in Python are:

So now let’s start our tutorial to reverse a list in Python.

Reversing a List in Python using the reverse() Function

Python list class comes with the default reverse() function that inverts the order of items in the given list. It doesn’t create a new list object instead straightway modifies the original copy.

It is the most recommended way to transpose the list both from speed and performance perspective.

So we can say reverse() is an inbuilt method in Python programming language that reverses objects of the list in place.

Here list_name will be that list whose reverse you want.

The reverse() function in Python doesn’t take any argument.

The reverse() method does not return any value in python but reverse the given object from the list.

Let’s see some examples to reverse the Python List using the reverse() function.

Example 1: Basic Example to Reverse a list in Python using the reverse()

In this example, we add some elements in the list and call the reverse() method. It just reverses the elements based on their positions.

In this example, we are trying to check what happens when we apply reverse() function in an empty list.

So in this example, we will check whether the reverse() functions work in a Python string or not.

The second way is a trick that applies to other iterables in Python. This way is extended slice; see an example below.

The difference between the reverse method and slicing is, the list remains unchanged after reversing as using the second way. In the case of list reverse Python method, the list order is changed i.e. the original list is reversed.

Slicing creates a shallow copy of the original list taking up more memory in comparison with the in-place reversal. As it creates a copy it requires more space to hold all the existing elements.

The point to note here is that structure of the list is replicated and not the contained objects i.e elements in a list. Hence, the elements are not duplicated thus saving space. Also, only the references in the structure holding addresses of objects are updated. As mutability applies to the elements contained in a list. If the object is modified it will be reflected in other copies as well.

Slicing is fast. But it is difficult to understand decreasing readability of code as you go through the code. Since it is fast its developer’s responsibility to use appropriate options depending on the scenario.

Understanding the script which is written using slicing could be time-consuming and difficult to visualize. The syntax is complex and doesn’t give a clear picture of what it is doing.

The reversed() function in Python allows us to process the items in a sequence in reverse order. It accepts a sequence and returns an iterator.

Syntax of reversed() in Python:

returns an iterator that accesses the given sequence in the reverse order.

If you need to access individual elements of a list in reverse order, it’s better to use reversed() method in Python.

Instead of using inbuilt function reverse() on sequences, we will use for loop to reverse a list.

What to Choose Between reverse() and Slicing

Extended slice syntax of Python iterator or sequence is the most preferable method to reverse a list. Although, It is the fastest method to reverse the list or any kind of iterator and most of the programmers use this method. It is not easy to understand for some beginner level programmer. list.reverse() is clear and readable for all level of programmers but it comes in computational cost. If your iterator or sequence is small in size then you may not notice any difference. It all depends on personal choice but it should follow the standards.

We have discussed four ways to Python reverse a list. All of them are good and easy to follow. But now the question is that which is to be used, so my answer is that “it totally depends upon situation”. You can opt for any one from them according to your problem’s needs. You can either use reverse() method, reversed() method, list slicing trick or you can also reverse the list without using any built-in function. All have their upside and downside so my suggestion is that you choose anyone which are best suited for your solution.

If you still have any doubts or suggestions do let us know in the comment section below.