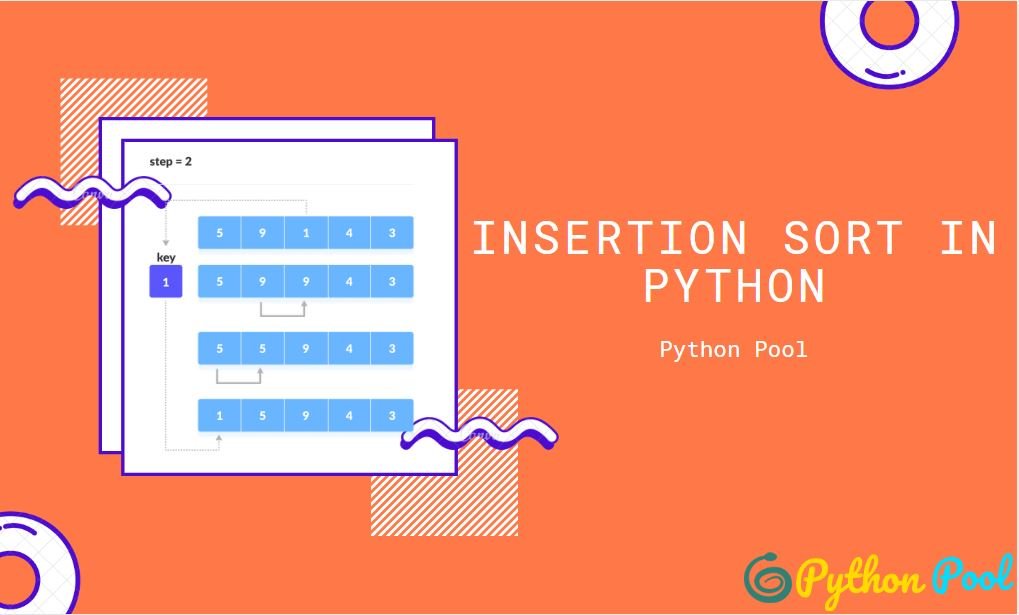 Do you remember how you arrange your hand of cards in childhood?  You first pick one card, then pick the next card and put it after the first card if it is bigger or before the first card if it is smaller. then you pick another card and insert it into its proper position. This is one of the most common examples of an insertion sort. You can easily implement insertion sort in python because python comes with a host of different functions each built specifically to add more versatility to the interface than before.

The Insertion sort in Python is another simple sorting algorithm, which can be used to sort any linear data structure like a list or linked list. On simplicity, this is next to bubble sort, and it’s also pretty close to how humans manually sort something (for example, a hand of playing cards). As the name suggests, Insertion sort is based upon insertion of an element in a sorted list.

What is Insertion Sort in Python: Overview

In the insertion sort technique, we start from the second element. Then compare it with the first element and put it in a proper place. Then we perform this process for the subsequent elements.

You can easily understand how insertion sort works in Python with the GIF shown below.

We compare each element with all its previous elements and put or insert the element in its proper position. Insertion sort technique is more feasible for lists with a smaller number of elements. It is also useful for sorting linked lists in Python.

Working of Insertion Sort in Python

To understand Insertion sort in Python we have taken an unsorted list for our example.

It finds that both 14 and 33 are already in ascending order. For now, 14 is in sorted sub-list.

Insertion sort moves ahead and compares 33 with 27.

And finds that 33 is not in the correct position.

These values are not in sorted order.

However, swapping makes 27 and 10 unsorted.

Hence, we swap them too.

We swap them again. By the end of the third iteration, we have a sorted sub-list of 4 items.

This process goes on until all the unsorted values are covered in a sorted sub-list. Now we shall see some programming aspects of insertion sort.

Following is the pseudocode of Insertion Sort for a zero-indexed list:

From the pseudo code and the illustration above, insertion sort is the efficient algorithm when compared to bubble sort or selection sort. Instead of using for loop and present conditions, it uses a while loop that does not perform any more extra steps when the list is sorted.

However, even if we pass the sorted list to the Insertion sort technique, it will still execute the outer for loop thereby requiring n number of steps to sort an already sorted list. This makes the best time complexity of insertion sort a linear function of N where N is the number of elements in the list.

Thus the various complexities for Insertion sort technique are given below:

In spite of these complexities, we can still conclude that Insertion sort is the most efficient algorithm when compared with the other sorting techniques like Bubble sort and Selection sort.

When we are playing cards each time we take a new card and insert at its proper position that’s the logic of insertion sort.

One more real-world example of insertion sort is how tailors arrange shirts in a cupboard, they always keep them in sorted order of size and thus insert new shirt at the right position very quickly by moving other shirts forward to keep the right place for a new shirt.

Indeed, it’s not as good as quicksort, heap sort, or mergesort for sorting large lists, but it’s good enough to sort small integer lists where the cost of comparison is small.

It remains a great algorithm for introducing future software developers into the world of sorting algorithms and is still used in practice for specific scenarios in which it shines.