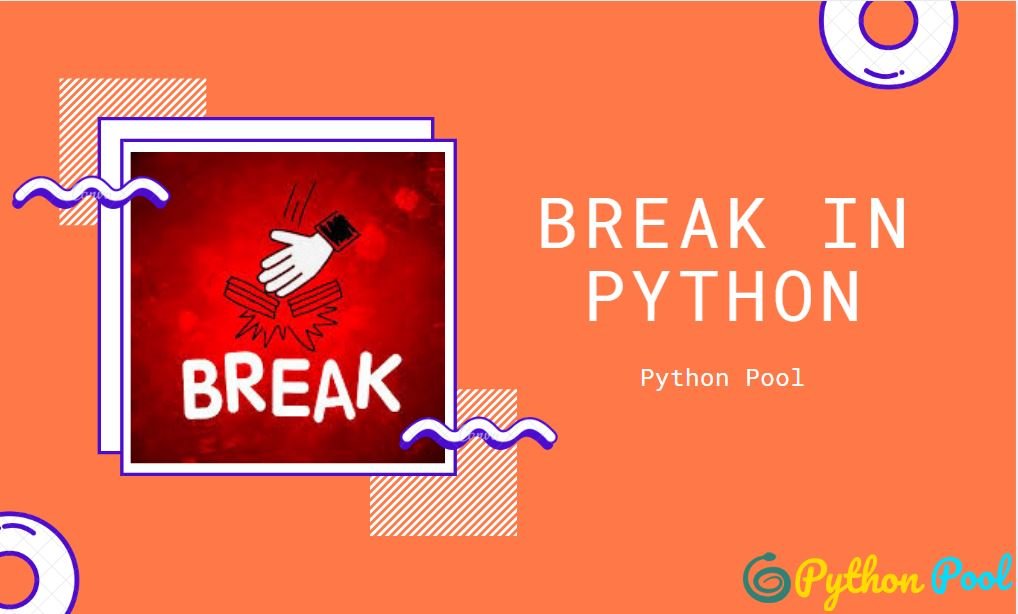 The Python Break statement can be used to terminate the execution of a loop. It can only appear within a for or while loop. It allows us to break out of the nearest enclosing loop. If the loop has an else clause, then the code block associated with it will not be executed if we use the break statement.

So Basically The break statement in Python is a handy way for exiting a loop from anywhere within the loop’s body.  Jump Statements in Python

Python-like other languages provide a special purpose statement called a break. This statement terminates the loop immediately and control is returned to the statement right after the body of the loop.

It terminates the current loop and resumes execution at the next statement, just like the traditional break statement in C.

An infinite loop is a loop that goes on forever with no end.

Normally in programs, infinite loops are not what the programmer desires. The programmer normally wants to create loops that have an end.

Working of the break statement in Python

While entering the loop a particular condition is being checked. If it satisfies statements in the loop are executed. In case it does not get fulfilled in that case loop gets broken and flow is redirected to the next statement outside the loop. Here break statement is used to break the flow of the loop in case any trigger occurs other than the stopping condition occurs.

Python break is generally used to terminate a loop. This means whenever the interpreter encounters the break keyword, it simply exits out of the loop. Once it breaks out of the loop, the control shifts to the immediate next statement.

Also, if the break statement is used inside a nested loop, it terminates the innermost loop and the control shifts to the next statement in the outer loop.

Why and When to Use Break in Python

The typical use of break is found in a sequential search algorithm. For example, if you need to search for an object in a collection, you will have to execute a comparison expression in a loop. However, if the required object is found, an early exit from the loop is sought, without traversing the remaining collection.

Python break statement has very simple syntax where we only use break keyword. We generally check for a condition with if-else blocks and then use break .

Syntax of Break in for and while loop.

What break keyword do in python?

break keyword in python that often used with loops for and while to modify the flow of loops.

Flowchart of Break Statement in Python

Python Break for while and for Loop

Example of Python break statement in while loop

In the following example, while loop is set to print the first 8 items in the tuple. But what actually happens is, when the count is equal to 4, it triggers if statement and the break statement inside it is invoked making the flow of program jump out of the loop.

Example of Python break statement in for loop

Following example will do the same exact thing as the above program but using a for loop.

PEP 3136 was raised to add label support to break statement. But, it was rejected because it will add unnecessary complexity to the language. There is a better alternative available for this scenario – move the code to a function and add the return statement.

Why there is no colon: after the break statement?

Important points about the break statement

The python break statement is a loop control statement that terminates the normal execution of a sequence of statements in a loop and passes it to the next statement after the current loop exits. a break can be used in many loops – for, while and all kinds of nested loop.

If still have any doubts regarding Python Break statement comments down below. We will try to solve your query asap.