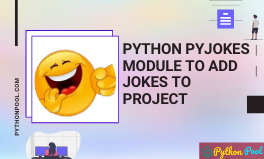 You can now get funny one-liner, mostly related to programming by using just importing a library known as pyjokes. You can add these jokes to your projects and you will get a different joke most of the time.

For different languages, choose the language from the given set of languages and you can also choose the category of joke you want to include in your project. In this article, we will learn how to import this library and include some jokes from it in between our programs.

For using the pyjokes library, we first need to import it. You can install it using – pip install pyjokes. You can choose from a variety of languages and the type of joke you want. Let us now see what languages and category are available.

Some Methods of pyjokes library

Parameter– The parameters are same as above- language and category.

Some Jokes from pyjokes library

Let us now change the category to ‘chuck’.

Change the category to ‘all’

Let us now change the category to ‘twister’. For that, we have to change the language to ‘German‘.

I know that most of us do not know the German language, so let me translate it for you into English.

Let us now retrieve more than one joke, we will use the get_jokes() method for that.

As you can see there are almost 100 jokes. We cannot print each and every one of them here. So let us run a for loop and print 10 jokes from them.

We will now make a very small Virtual Assistant program and include jokes in it.

Pyjokes library has some really good jokes and how will you use it, totally depends on you. There is a huge room for improvement too. The number of languages and categories can be increased to make this library perfect.