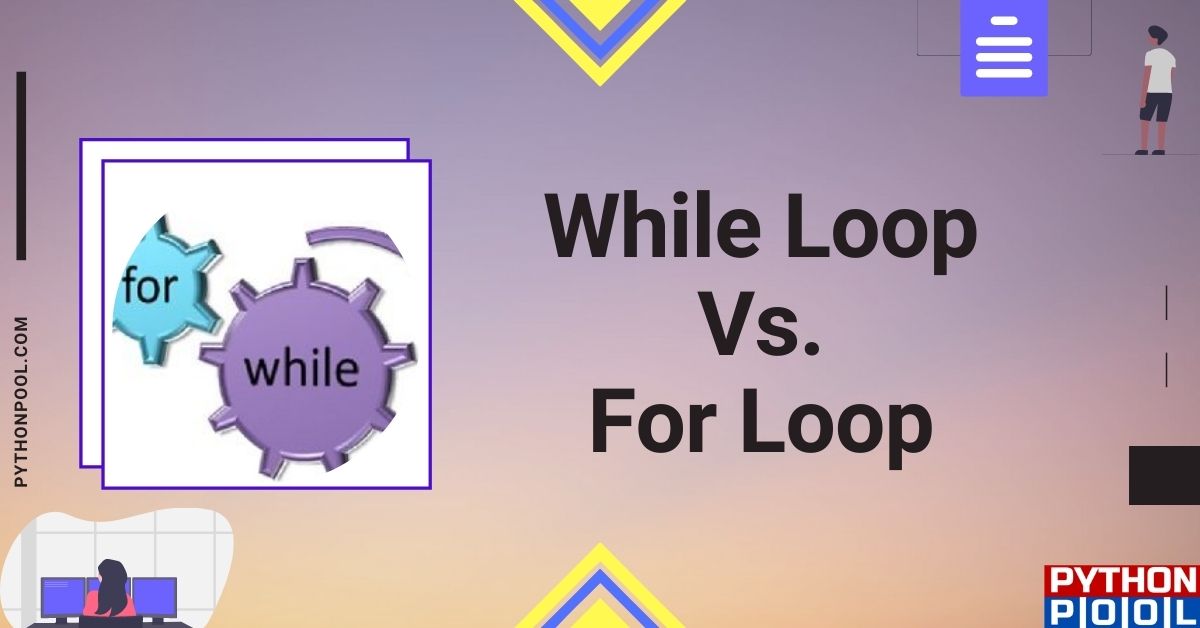 Loops are one of the most basic entities inside a given programming language. With loop statements, we can execute a given piece of code till a certain condition is fulfilled. Once the condition becomes false, the program will then stop iterating over the loop statement. It will then execute the code after the loop statement. We can use loops to iterate over a given sequence, such as a list, a dictionary, a tuple, etc., or we can use it to execute a piece of code repeatedly. If you are new to python, then this article will be great for you in order to understand the difference between the two loops in python – for vs while loop.

For vs While Loop in Python

Types of loops in Python

In python, we have two different loop statements in order to loop over a piece of code in two different ways. They have the same functionality – i.e., they will execute a certain piece of code only if a condition is met. Yet, they differ in syntax and some other aspects.

The While Loop In Python

The while loop statement is used to repeat a block of code till a condition is fulfilled. When we don’t know the exact number of times, a loop statement has to be executed. We make use of while loops. This way, till the test expression holds true, the loop body will be executed.

The syntax of python’s while loop is:

Let us understand with the help of an example.

Here, the above code is for printing the sum of n numbers as entered by the user. We don’t know here what will be the number that the user will enter. So, we shall use a while loop in order to print the sum of ‘n’ numbers. First, we take ‘n’ as input from the user. Then we have two variables, ‘sum’ , which will calculate the total summation and ‘temp’ for storing the value of ‘n’.

The For Loop In Python

The for loop in python is used to iterate over a given sequence. The sequence can be a string, a list, a tuple, a set, a dictionary, etc. As long as the length of the sequence is not reached, it will iterate over that sequence. The for loop contains initialization, the test expression, and the increment/decrement expression in the C language. Whereas in the case of python, we only have to mention the value and the sequence to be iterated.

The syntax of for loop in python is:

Here, the value can be either an iterable or a sequence item. If it is an index, we use the range() function instead of the sequence. Otherwise, we can mention the sequence.

Example of for loop:

Here, we have taken a simple example to show the usage of a for loop. We have a list named ‘color’, which contains three colors. Then we use a for loop where we pass ‘item’, which represents each individual item in the sequence, and ‘color’ as the list sequence, which has to be traversed. Inside the for loop, we will print each ‘item’.

The output will be each list element printed one at a time.

If we want to iterate using indexing, we can achieve that using the range() function.

Here, we pass the sequence ‘color’ length as an argument to the range() function. Using the ‘index’, we print each individual sequence element.

Trending
The Secret of Comparators | Comparison Operators in Python

For loop vs while loop python

The for loop and while loop are two different approaches to executing the loop statements in python. They both serve the same functionality of looping over a python code till a condition is being fulfilled. For loops and while loops differ in their syntax. In while loops, we have to mention only the condition before starting the loop. Whereas in the case of for loops, we have to mention the iterable as well as the sequence over which we iterate.

for vs while loop Python [Speed Comparison]

We cannot depend on inner timer modules on how the while loop and for loop performs in python. There are many external factors that come into account.

Disassembly is a detailed breakdown of how each piece of code performs in Python. After disassembling using dis module, we can get to know that while loop has 10 operations if you are incrementing a variable in it and checking condition. Whereas, for loop has 3 operations for looping through range() function.

As a result, using dissassembly, you can clearly observe that for loop with range() function is clearly faster than the while loop with increment method.

Let us take two examples for iterating over a sequence – one using for loop and the other using while loop. We shall determine the speed using the time() method present on the time module.

Program for finding time taken by the for loop :

Program for the time taken by the while loop:

That wraps up the comparison between for vs while loop in python. If you have any questions in your mind, do let us know in the comments below.